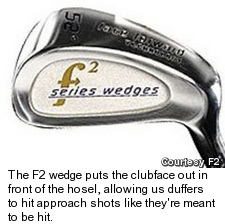 The F2 wedge: Looks can be very deceiving with this golf club

The F2 wedge has a simple, but radical design difference from conventional wedges that enables golfers to compress the golf ball for added distance and spin.

I'm not only suspicious when I see golf infomercials touting the latest miracle club, I'm downright hostile and sarcastic.

Still, every so often I'm obliged to review clubs that have appeared on infomercials. I actually hadn't seen the F2 wedge infomercial before I received the club in the mail for the purpose of a review - if I had, I probably wouldn't have ordered it.

Even then, it took a while before I got down to the business of reviewing it because - there is no way to sugarcoat it - it's an ugly club. Ugly as in butt-ugly.

I didn't want to touch the thing. It sat in my bag for a long time, staring up at me like a deformed, alien baby on the X-files.

Finally, I couldn't put it off any longer. I sucked it up and pulled it out. I nearly gasped, but eventually just laughed.

F2 stands for "face forward" technology. In practical terms, what this means is F2 Golf simply moved the face forward of the hosel. It sticks way out there in front like the leader of a marching band. It looks like something picked out of the "reject heap."

I remembered what I had read on the company's Web site: "From 100 yards in, you will hit the ball to within 10 feet of the pin twice as often."

I picked out the 100-yard marker on the driving range, and controlled my revulsion. The first shot landed about five feet from the marker. The second shot about seven feet. The third shot about four feet.

Eventually, I became so accurate with this beast I started aiming for the tiny spot between the two posts that help up the marker, and hit it about half the time.

Ugly is not as ugly does, to paraphrase Forrest Gump.

The F2 folks will give you all sorts of reasons why the technology works so well, and we'll get to that in a moment, but I have my own theory.

The pros tell us most amateurs leave their divots well behind the golf ball, instead of in front of it, where it should be. You should strike the ball first, not the earth behind it. This enables you to compress the ball, which gives you added distance and spin.

The F2 makes that much easier, because the clubhead is well ahead of the shaft at impact.

The F2 folks say sort of the same thing, insisting the face forward technology enables the ball "to strike and leave the clubface before grass or sand can grab the hosel and and twist the clubface."

It also claims that the club is "shank-proof," a claim backed up by some reviewers. I won't get on board with that. I think the company is under-estimating the truly bad golfer.

Still, I hit far fewer shanks with the F2 than with other wedges, after extensive testing on the range and on the course.

The same idea makes it an excellent club to chip with. Most amateurs don't get their hands forward, ahead of the ball, when they chip. The F2 also makes that easier to do. It allows you to use the natural loft of the club and forego trying to create it yourself.

It's also excellent out of the rough or sand, since it moves through both with less resistance. I can now hit high, soft shots out of greenside bunkers.

It's such a simple, but radical, idea. No crazy, special grooves or loft combinations. Just move the damn face forward, a little correction for human flaw. All the millions of dollars spent on golf research, and this little concept has been overlooked for this long.

I have four wedges in my bag, and I am using the F2 almost exclusively now from 100 yards in.

Some golfers, who have generally praised the club, have complained it doesn't work well off tight lies. I beg to differ. Since the club is designed to strike the ball first, I found the type of lie isn't as important as with other clubs.

If you're wondering whether the F2 is legal or not, the answer is yes. It meets all USGA specifications. Good thing the USGA doesn't have aesthetic minimums.

I wouldn't recommend it for low handicappers, but if you're a high or even mid-handicapper who has trouble in the scoring zone - from 100 yards in - I'd definitely recommend this club.

The company also has a line of irons, 4-iron through pitching wedge. I am definitely going to try those. 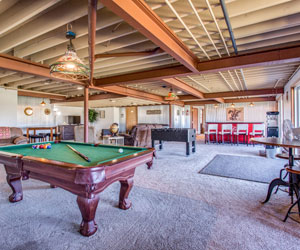