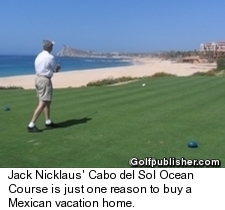 As home prices continue to hit new levels throughout much of the United States, Mexico has emerged as a solid contender for people to either buy second homes or invest in a vacation property.

For golfers, this has translated into a Mexican boom, which has seen areas like Cancun, the Mexican Riviera and Los Cabos explode with many new offerings of luxury, gated homes in golf rich areas.

Recently, the citizens of Mexico voted in a conservative president for just the second time since 1910. While Felipe Calderon's victory came with controversy, this didn't lead to social upheaval as Mexican elections have shown to be fair throughout the years.

As for foreigners, laws have slowly been modernized to make owning property in Mexico easy and with less bureaucracy.

"Recent reforms to the Mexican constitution and judicial system have significantly strengthened the rights and freedoms of foreign owners of Mexican real properety," wrote Bruce Greenberg for Best's Golf Guide to Mexico.

A second home in Mexico can be declared on U.S. tax returns. Nonetheless, this is an area, as is titles for your Mexican property, where changes can occur on both sides and getting guidance beforehand is your best bet.

"The golf courses in Mexico are great, the ocean waves are fantastic, the sounds of the waves is invigorating, the margaritas are cool and strong - but do not leave your brains at the border. Get professional assistance," wrote Greenburg.

A little more than a decade ago, Mexico underwent a currency crisis that saw the peso collapse, followed by economic problems.

Since that time, however, the Mexican economy has been a startling rebound, with economic growth at 5 percent in 2005 and inflation rarely reaching more than 5 percent. Many of these successes can be attributed to the trade agreement NAFTA, as Mexico is the largest trade partner of the United States.

Still, should another devaluation of the peso occur, investors in Mexico will likely emerge from it unscathed. Currently, the peso trades at around 10 to one U.S. dollar.

"It would probably have little impact on the performance of real estate sales in the well-established golf course residential corridors," wrote Greenberg. "Real estate in the "Gringo" resort communities is dollar dominated and not peso based; therefore a devaluation of the peso most probably would not adversely affect real estate prices.

For golfers, Mexico is quickly becoming the dream destination. And while many look down south to find great real estate deals and investment properties, there are others who just would like a place to stay while they play some of the amazing golf courses in Mexico.

Courses like Cabo de Sol, which has changed the way resort courses are viewed have changed the Mexican golf landscape. Other golf clubs like Palmilla and El Dorado continue this pattern of excellence in Mexican golf.

For those looking to golf, but not own, golf packagers like Cabo Golf Tours ((702) 851-0839) will have you playing the best courses the nation has to offer, at low prices.

But for those looking to own, now may be time to pull the trigger. Golf courses keep coming and land values keep rising. It's as Lawson said: