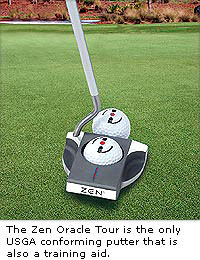 Line 'em up and knock 'em down

BOSTON, Mass. - Long gone are the days when you could slap a flat chunk of brass on the end of a short shaft and sell it as aputter. The 21st Century putter is replete with user-friendly featureslikeheal-toe weighting, face-balancing, polymer face inserts, increased MOI,andmultiple alignment aids.

And we're not going to touch the whole long-putter debate - not even with a 54-inch shaft.

The recent boom in mallet-style putters is directly attributable notonlyto their extra mass, which promotes a smooth, pendulum stroke. Perhapsmoreimportantly in the new breed of putters is the way club designers usethelarger putter heads as alignment aids. In days of yore, a simple whitedashin the middle of the topline to show where the sweetspot was sufficed.Butno more.

Here is a trio of new putters, all of which feature alignment assistance, along with a variety of other bells and whistles that, if nothing else, look really cool on the links.

The Zen Oracle Tour has the distinction of being the only UnitedStatesGolf Association conforming putter that is also a training aid. Theface-balanced mallet's main feature is a ball-sized "aperture" or holeimmediately behind the face. This aperture is the key to the trainingfunction. Put a ball inside it and take a normal putting stroke. Theballstays inside longer than it stays on the face, so when the ball isreleased(either forward or backward, depending on the goal of your practice) anyfaults in the swing path are magnified. An outside-in stroke, forexample,will miss badly left. The aperture can be used to check the path of yourtake-away as well.

The Zen Oracle Tour comes with a training video and drill flashcards(both starring Phil Mickelson's instructor Rick Smith). In addition tothetraining feature, the putter incorporates other alignment aids,including amaterial finish contrast framing the aperture behind the ball, and alineextending from the face through the aperture to the back of themallet-head.

The putter comes in standard, belly, and long models (MSRP$160-$199),all with elastomer polyurethane face insert and silky Winn grips. Thegolfers we asked to try our 35-inch standard Zen Oracle Tour were allimpressed with the looks and training aspect. The heavy 350-gram weightwasmore than a few could get used to in a short testing session,however.

By the end of the four-day PGA Merchandise Show in Orlando this past February, STX had sold so many of the new Envision putters that it had surpassed its own six-month projected sales. STX Putters knew the Envision was a special product even before the show began. "Over the last year or two we've seen a lot of new putter designs in the market, all with the idea of moving weight low and to the rear of the putters," said Jeff Matheson, STX global sales manager. "The Envision is the first putter in this new category, designed to achieve the same results without looking big and awkward," he added. 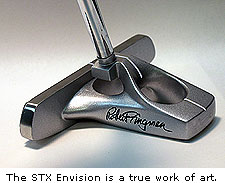 The Envision is the first in the company's line of ImpressionistSeries,designed by Robert Engman. Engman at one time chaired the sculpturedepartment at Yale and was also the Dean of the Art School at Penn. Inotherwords, the Envision is a real work of art, which is refreshing in thisdayof branding-iron-meets-UFO contraptions.

The Envision is face-balanced with a slight heal bias to eliminatepushes. The straight, center-mounted shaft joins the putter head justbehindthe face, and above two small holes positioned directly behind thesweetspot. One thing that sets the Envision apart from its competitionisthe sleekness of the mallet head: the weight is concentrated straightbackfrom where the ball is struck.

The Envision (MSRP $175) comes with one of two face inserts: a softerblack one for faster greens, or a harder red one for slower greens. Onething we noticed was that the stylish design provided no surface areawithwhich to tamp down ball marks. However, the lack of a broad sole,typical ofmallets, meant less accidental scuffing of the turf on the backswing.Theprecise angle of the grip places the hands properly ahead of the ball,butthe forward pressers among our testers ended up delofting the clubfacetoomuch and affecting the roll.

La Jolla Golf, long-known as a producer of clubs for ladies and juniors, has begun to develop a sophisticated and flashy line of mainstream clubs. The GA Putter series is the company's first significant flatstick engineering innovation. GA stands for Geometrical Alignment, and the GA series of putters features a sort of bi-level alignment system. 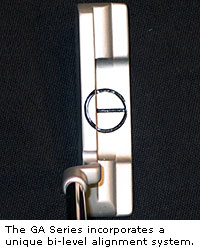 On the topline of the putter face is one quarter of a black circleandits center line. On the back of the clubhead - in the case of ourGA400-1model, a broad, weighty flange - is the rest of the circle and line.Whenthe clubface is perfectly perpendicular to the ball, and the loft andlie-angle are ideal (i.e., when the hands and eyes are positionedcorrectly), the pieces of the circle and line meet up and appear fromaboveas one. Very clever.

Our testers were impressed by this alignment system - they knewexactlywhere they were aimed. A few people, however, became obsessed withkeepingthe circle in one piece and were distracted, watching the putter headratherthan the ball. Nevertheless, the bright red grip, retro styling, andaforementioned alignment system make the GA (MSRP $109) attractive onseveral levels. In addition, each GA Series putter comes with a freeBickler puttingtrainer.